If this be climate change, bring it on! 🙂

After four years of cultivation, a Vancouver man’s banana plant has flowered and developed fruit, something he never thought was possible because of the city’s climate.

“Not in Vancouver,” said Antonio Zullo. “I mean I got the plant because it’s nice, it’s tropical. I never thought I’d see that in Vancouver, absolutely not.” 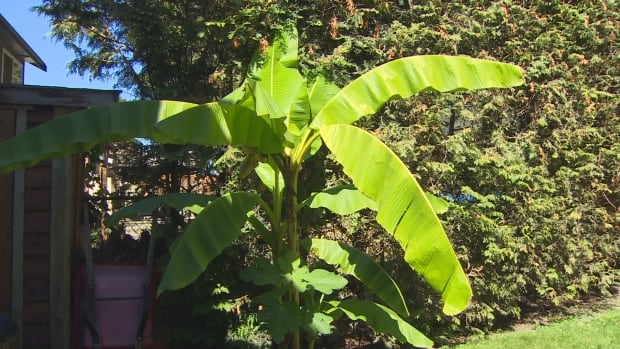 There aren’t many places in the world where you see a banana plant growing up along a cedar hedge. (Nic Amaya/CBC)

Zullo started growing the plant from a shoot, and at his home after taking a shoot from a banana plant at his previous residence.

Each winter he carefully covers it to protect if from the cold. It’s now about two metres tall.

“Maybe the climate’s warmer,” said Zullo after being asked why he thinks the plant has flowered and produced fruit. “But it’s been a great summer and I’m hoping it stays like this for another month so I can actually eat some.”

On January 23, 1941, in Beaumont, Texas, the Cape Lookout cargo ship was launched using three-and-a-half tons of “well-ripened bananas” in order to lubricate its slide into the water.

The reason bananas were used was because, at the time, they were cheaper than grease.