A Montreal man’s decision to let loose and belt out a 1990s dance hit while inside his car has landed him a $149 ticket for being too loud in public.

But Taoufik Moalla said Monday he’ll fight the ticket and denies his singing was as deafening as authorities claim.

“Do you think that inside my car is a public place?” Moalla asked, adding: “And it was not very loud.”

Moalla, 38, said he was happily singing along with the windows mostly rolled up to C+C Music Factory’s “Gonna Make You Sweat (Everybody Dance Now),” a dance staple and chartbuster from 1990, when he was stopped.

“I don’t think it was too loud, I was happy, I was in a good mood and I was just repeating the refrain (Everybody Dance Now),” the father of two said in an interview.

“It was one or two seconds, then I heard the sirens.”

He was on his way to do groceries on the evening of Sept. 27 and thought police just wanted him to get out of their way.

“Finally, it was my car they were looking to stop,” he said, adding that four Montreal officers pulled him over just a few hundred metres from his home.

“They asked me if I was yelling and I said no, I was singing,” Moalla said.

One of the officers walked away and returned with the fine for screaming in a public place. 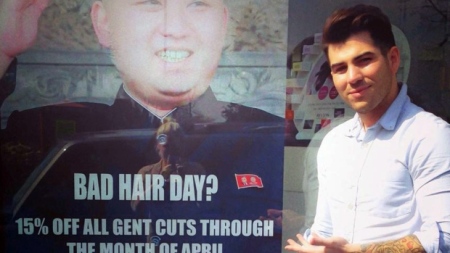 This is the guy the Nork dorks want punished. 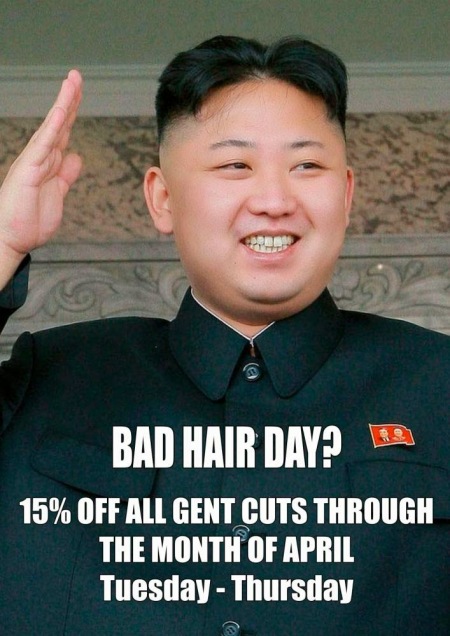 Hey, Nork dorks! Your leader’s hair sucks! What a pathetic loser. We can say that in free countries, and there’s not a bloody thing you can do about it. 🙂

The Foreign Office said Wednesday it had received a letter from the country’s embassy objecting to the poster, and was considering its response.

Staff at M&M Hair Academy say they were visited by diplomats from the nearby embassy after putting up a poster featuring a picture of Kim — who sports a distinctive undercut — and the slogan “Bad Hair Day?”

Police say they spoke to both parties and determined no crime had been committed.

Stupid police – you had to harass him by communicating him to determine that? How dare you!

Even in Airstrip One, they still have some measure of freedom of speech, so long as not ‘against’ Muslims, their overlords.