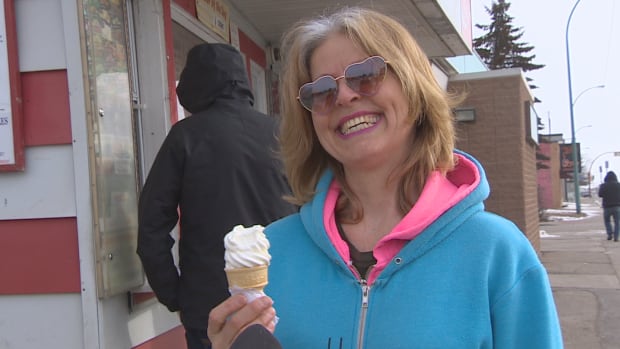 It’s nutty and freezing cold — and we’re not talking about the ice cream.

It may be bitterly cold outside (about –20 C), but that’s not stopping a popular Regina ice cream shop from holding its “spring” opening.

Milky Way Ice Cream is seasonal and sells ice cream out of windows to people waiting outside. But owners decided today was the day to open their shutters.

“We’ve been here for 37 years and this is the earliest we have ever opened and probably the coldest,” said co-owner Carole Boldt.

Boldt said they checked the weather forecast a few weeks ago and this week was showing temperatures up to 7 C.

“So we just went ahead and did it. We pick a date and just do it,” Boldt said.

‘Victorian Crime, Sex and Scandal’ is a history course, supposedly…

Have a half-chicken sub (not half a chicken sub)…

If you’re one of many Canadians who opt for chicken sandwiches at your favourite fast food restaurant, you may find the results of a CBC Marketplace investigation into what’s in the meat a little hard to swallow.

A DNA analysis of the poultry in several popular grilled chicken sandwiches and wraps found at least one fast food restaurant isn’t serving up nearly as much of the key ingredient as people may think.

In the case of two popular Subway sandwiches, the chicken was found to contain only about half chicken DNA.

The majority of the remaining DNA? Soy

Bertrand Beaulieu was on his daily walk along Broadway Boulevard around 9:30 a.m. when three deer ran past him.

They went straight for a nearby Canadian Tire gas station — and straight to the door of the store, he said. One deer led the way.

“They did not curve or anything. They went straight for the door.”

Crokicurl — the new ice game that combines elements of the board game crokinole and curling — has made its debut in Winnipeg.

What are believed to be the world’s first crokicurl games were played at The Forks on Friday, with more people joining in the new activity Saturday.

“It was a lot of fun,” said Cameron Langedock, who brought his wife and son out to play the game. “It’s creative and it obviously brings people together.”

Crokicurl is similar to a life-sized version of the board game crokinole —  in which players take turns flicking small discs across a circular board, trying to land the discs in the higher-scoring parts of the board.

Crokicurl, which uses rocks about the size of curling rocks but made from lighter materials, is played with two teams made up of one or two players, who try to score points by throwing the rock into the centre of the ice, where the highest-scoring circle is.