That’s got rid of a bit of the boredom pic.twitter.com/wOuLbvln5T

A country known for its laissez-faire attitude to nudity, France already boasts stacks of beaches, campsites and pools that can be enjoyed in the nude.

But now, Paris has opened its first-ever naked restaurant where diners can bare all while tucking in to dinner, Le Parisien reports.

Aptly named O’naturel, the restaurant opened to the public on Friday after a successful private dinner reserved exclusively for the Paris Naturist Association on Thursday.

This is why you should never let anyone take nude pics of you; someday, even if after your death, they may end up seen by millions… 😉

See here for more information.
From “The Canadian Look: A Century of Sights and Styles”, Ken Lefolii, 1965, McClelland and Stewart, Ltd.

(From a vodka ad campaign in Romanian Playboy, uncensored here.)

Man, I hate when that happens!

God in the Wasteland

Men and women would typically be separated for the ceremony because they would be baptized naked. The ceremony would be held during the 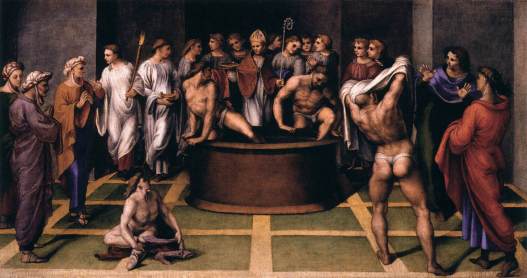 great Easter vigil. At some point prior to the disrobing, the candidates would face the west, extend their hands, and renounce the devil and all his works. Then, facing the east, they would repeat their profession of the faith….Before entering the font, candidates would strip off their old clothes—goatskin sackcloth, which they trampled under their feet. There were three immersions, each one preceded by a question about faith in the persons of the Trinity to which the candidate would respond, “credo”—“I believe.”

—Packer and Parrett, Grounded in the Gospel: Building Believers the Old-Fashioned Way, p. 57.

I read this to my wife, who quickly responded, “We’re not doing that in our…