It’s an unlikely scene in deeply conservative India: A hugely popular Bollywood male star grinning widely as he holds up a sanitary pad and talks of menstrual hygiene.

But that’s exactly what action hero Akshay Kumar did as he promoted his film Pad Man, which opened in theatres Friday. Kumar plays the lead role of a man who starts manufacturing inexpensive sanitary pads after he discovers his wife’s lack of access to them in a small town in southern India. 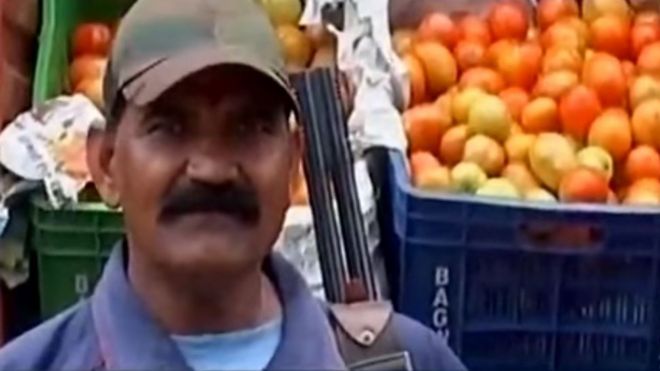 The price of tomatoes has risen so much in India that armed guards have been deployed to protect shipments of them in one state.

The Hindustan Times on Sunday cited a wholesaler at a market in the city of Indore, in Madhya Pradesh state, saying that the security of tomatoes was of “considerable concern” because of their “skyrocketing” prices.

The wholesaler said the administrators of the Devi Ahilya Bai Holker market had appointed half a dozen armed guards to keep the tomatoes safe – particularly when they are being unloaded from trucks.

There have been reports elsewhere in the country this month of thieves making off with tonnes of tomatoes worth thousands of rupees.

The Holy Cow Foundation in India has succeeded in turning cow urine into a liquid cleanser that will soon be cleaning office floors throughout India. It’s calling this new product Gaunyle. It says that the cow-urine product is safer than synthetic cleaners, it’s “full of natural goodness,” and its use will provide income for people who raise cows. So overall, its use is a “win-win” for everyone. [economic times]

Later, if when actually married their husband dies before them, they’re not a widow, because still married to the god Vishnu.

The VHP is just not going to let go of the idea that cow urine is a magical elixir. They managed to start selling cow urine cola (Cow-Ka Cola?) five years ago, but didn’t stop there.

Now they’ve launched a full range of cosmetics (cowsmetics?) made with cow urine and dung. Not only do they believe that these have medicinal value, but also that these are better than the things you get in the market.

“The use of gau mutra in medicines and beauty products will help farmers and prevent them from selling cows. Ayurveda talks about use of cow dung to prevent pimples. But people are reluctant to use dung, which is why we are making beauty products out of it,” VHP leader Venkatesh Abdeo told the Asian Age.

This is the definitive list of what you can get your bhakt friends this Christmas:

As the saying goes, one man’s bullshit (or cow dung) is another man’s moisturizer.

If you happen to unearth treasure worth even as little as 10 rupees (16 U.S. cents) in India, don’t even think of pocketing it – that’s because under a law introduced by the former British colonial rulers, it still belongs to “Her Majesty”.

1838 law that says property in an area of the former imperial capital of Calcutta can only be sold to the East India Company, which laid the foundations of the British Empire but ceased to exist more than 150 years ago.

An 1855 measure removing a certain tribe from the purview of local laws because it was an “uncivilised race” will also go.

Flying kites or balloons without police permission is illegal across India as they are classified as an “aircraft” under a 1934 act, and a World War II decree outlaws the dropping of pamphlets from the air in the state of Gujarat.

Under the Motor Vehicles Act, the state of Andhra Pradesh enacted a law that a motor inspector must have a clean set of teeth and anyone with a “pigeon chest, knock knees, flat foot, hammer toes and fractured limbs” will be disqualified.

A swanky New Delhi hotel was threatened with a lawsuit for refusing to give water to a person who invoked an 1867 act under which a rest house must offer passers-by free drinks of water.

Factory owners have suffered at the hands of government inspectors who insist on rules requiring spittoons to be kept in the premises as well as earthen pots for drinking water. Even if factories install modern fire extinguishers, they must still have red-painted buckets with water and sand to put out a blaze.